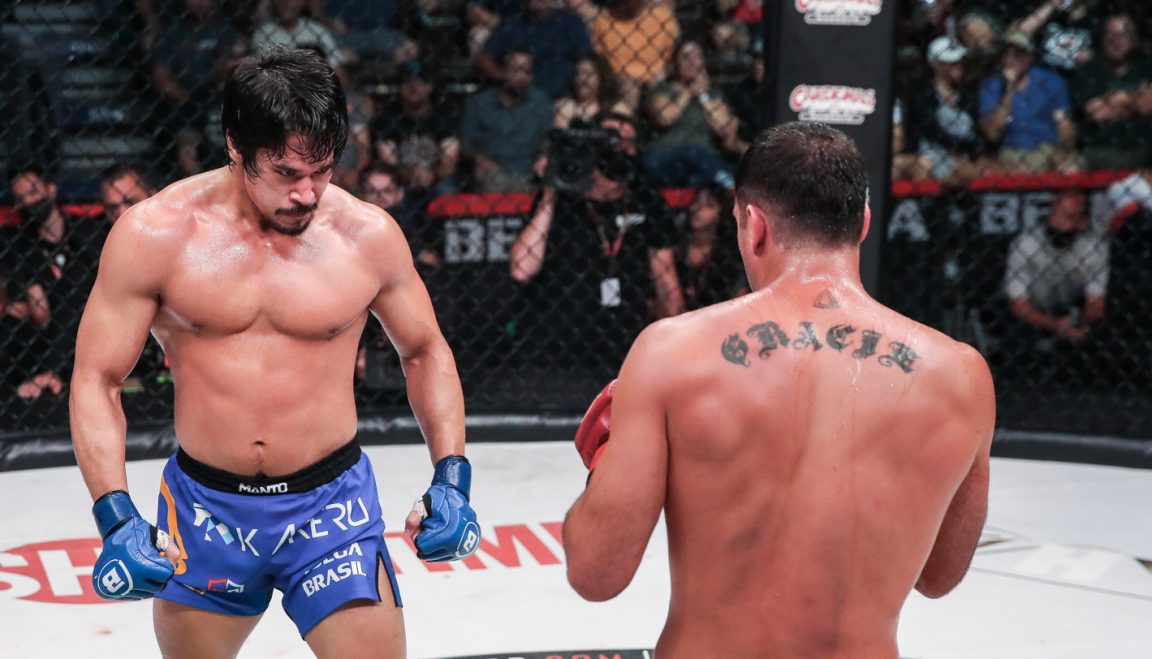 What a KO by Goiti Yamauchi! He stopped Neiman Gracie via a perfectly placed uppercut. Check out complete Bellator 284 fight card with results.

Goiti Yamauchi (28-5) defeated Bellator number 5 ranked fighter in the world, Neiman Gracie (11-3) via KO (punch) at 3:58 of round two
Goiti Yamauchi following his victory: “It feels amazing. It’s a product of hard work, courage, and a lot of dedication, not just for this camp, but for my entire life I’ve been working to have this moment. This moment, I consider the beginning of an era, my era; the best time of my life. All I can say is thanks to everyone that watched.”

“I’m a very defensive fighter; I don’t get hit in the competition. I don’t know what happened — I went ‘Beast Mode.’ I just wanted to take some shots and make the fight dramatic. ‘Big drama show.’ I went for it in this fight, and it worked.”

“I watched the fight [with Storley] and saw I could make Neiman make some mistakes, and I exploited them… We go to autopilot mode when we’re fighting; we just want to finish the fight as fast as possible. In the first round, I got him with the good left hand, but it was just a knockdown and I couldn’t finish. But when I threw the uppercut, I knew he was done. His body just dropped too fast, and I knew this was the end of the fight.”

“That’s one of the most important days of my life. It’s very meaningful beating such a hell of a fighter. Winning by knockout, that’s what I was planning to do. He’s a very dangerous grappler. When we collided on the ground, I was like, ‘Watch out.’ He’s very dangerous. When he was trying to do guard, I could tell he was dangerous, I was like, ‘Let’s go to Plan B.’ He’s a natural-born grappler. He’s very comfortable on the ground. It made the fight very difficult, but I think I made the right strategy; you can’t have a plan to fight a guy like Neiman, you just have to adapt your style during the fight, and that’s what I did.”

“I moved up twice here in my Bellator career, from 145 to 155 and now to welterweight. They’re both good and exciting weight classes. There’s a lot of top fighters. I think the best fighters are probably at lightweight and welterweight. I’m excited. This is my real weight class. I feel strong, powerful, and with a lot of energy. Hopefully, I fight all of the top fighters in front of me…

Ilima-Lei said: “I was like, ‘I feel like this is what drugs feel like.’ It’s weird. Fighting really is like a drug. Once you step in there, once you start fighting, it’s like, ‘Oh yeah, I love this shit.’ I still do love this sport despite it being real shitty sometimes.”

“It’s been a very long road. I feel like a lot of my feelings about fighting changed when I lost the belt. It’s been a roller coaster for the last two and a half years. This fight game is such an emotional roller coaster, but that win definitely helped me realize that [my heart’s] still there.”

“Of course I want to freakin’ retire as the champ. That’s the ultimate goal, is to go for it one more time. My ultimate dream retirement fight would be in Hawaii, fighting for the belt against my friend Liz Carmouche. It’s the ultimate fight. This is it. This is the perfect storyline, and I know that when the day comes when we fight each other, it’s going down. It’s going to be fun. And I say that with the ultimate respect for her.”

“I can take a hit. I have dens- ass Polynesian bones. Striking’s fun, and I learned that as long as I’m patient, the ground will come. I’m really proud of how far I’ve come.”

“Before the missed weight and everything, I was like, ‘If I come out of this fight unscathed, I’m gonna ask to be on the Dublin card!’ But then the weight cut came, and it was terrible. My body needs to rest and heal. I think timeline-wise, I won’t fight again this year. Definitely gonna be sometime next year; maybe the Spring time.”

Aaron Jeffery (13-3) defeated #2-Austin Vanderford (11-2) via TKO (strikes) at 1:25 of round one
Following the win, Aaron Jeffrey said: “It was short. I was just saying to my coaches, I kind of wanted to see if I could hang with him in the wrestling and break him, but this is cool, too… It felt different this time; maybe it was because it was short notice. Maybe it was kind of less pressure, even though it was a huge fight.”

“Like I said in my interviews, it wasn’t a lot of time to prepare. I wrestle with the top university in Canada. I come from a strong wrestling gym. I felt like it was a good fight for me… knocking a guy out in a minute probably doesn’t do too much for Canadian wrestling, but I keep saying I can wrestle, so maybe one of these days.”

“I don’t know. I don’t know if they put me in right at #2, or if they put me somewhere arbitrary like #5? We’ll see in a few days… I know there’s still gonna be haters, but this is big, man… That’s why I took this fight on eight days’ notice; I’ll get back in the gym and I’ll stay ready, and maybe I’ll get back in here soon; Scott Coker, put me on that card in Long Beach, let’s go.”

“That would be very sweet. I just want to get my hometown of Tillsonburg to mention me. All the other newspapers are writing about me. It’; a town full of old people. Maybe they’re not into fist-fighting, I don’t know.”

All photos from Bellator 284 – credit goes to: Lucas Noonan/Bellator MMA 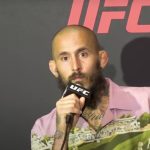