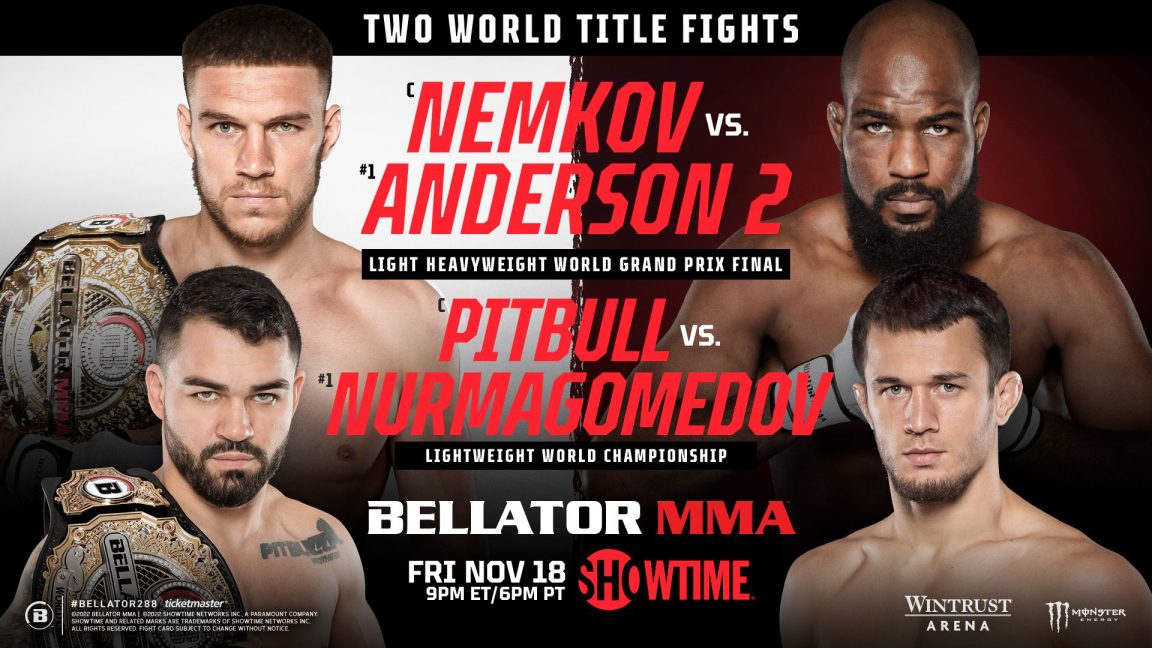 BELLATOR MMA today announced two events to cap the promotion’s biggest run of live events in years—five events, featuring four of BELLATOR’s championships, and over 30 fighters ranked in the top-10 of their respective weight classes will be competing during this exciting four-month span.

On Friday, Dec. 9, the Mohegan Sun Arena plays host to BELLATOR 289: Bantamweight World Grand Prix Semifinals as the final four 135 pounders each find themselves just two victories away from the million-dollar prize. Two-time NCAA wrestling national champion Raufeon Stots (18-1) defends his interim title opposite fast-rising star and No. 6-ranked Danny Sabatello (13-1). On the other side of the bracket, No. 2-ranked Patchy Mix (16-1) takes on No. 3-ranked Magomed Magomedov (19-2).

In addition to the newly announced events, the BELLATOR lineup from September to December also features a star-studded event in Long Beach, Calif., along with visits to Dublin, Ireland and Milan, Italy as BELLATOR continues to reinvigorate the European MMA scene.

BELLATOR returns to the Windy City for the first time since 2019, and Illinois fight fans will find it to be well worth the wait, as 205-lb. champion Vadim Nemkov (15-2, 1 NC), and No. 1-ranked Corey Anderson (16-5, 1 NC) square off in the highly anticipated BELLATOR Light Heavyweight World Grand Prix Final, a rematch after their first Grand Prix Final fight ended in a No Contest

Vadim Nemkov, 30, of Russia is eager to make the most of his opportunity against Anderson following the dissatisfaction of their first fight.  Many believe Anderson was on his way to becoming the new BELLATOR champion, but an accidental headbutt ended the fight just five seconds prematurely. Adamant that he will “correct his mistakes,” Nemkov has been next to perfect in his BELLATOR tenure.

The protégé of the legendary Fedor Emelianenko is unbeaten in eight BELLATOR fights, including a title-clinching knockout victory over heavyweight champion Ryan Bader in August 2020, stoppages of former champions Liam McGeary and Rafael Carvalho, and two sound defeats over Phil Davis. Facing off with Anderson again allows Nemkov the opportunity to erase the lone semi-blemish of his record.

Rockford, Ill’s, Corey Anderson believes that he would have won the match in its later rounds if not for the headbutt that stopped the fight with just five seconds remaining in the third frame. The 32-year-old’s path to the BELLATOR title fight was dominant, outclassing Dutch star Melvin Manhoef in his BELLATOR debut before knocking out Grand Prix opponents Dovletdzhan Yagshimuradov and Bader to reach Nemkov in the finals.

Patricky ‘Pitbull’ Freire, 36, captured the title in November by knocking out Ireland’s Peter Queally in the second round of their BELLATOR 270 rematch. ‘Pitbull’ will look to defend his title for the first time against the undefeated Nurmagomedov. With a victory, Pitbull would retain his title and maintain his and his brother Patricio’s status as the lone brothers to simultaneously hold MMA world championships.

Fresh off a blistering first-round submission victory against Chris Gonzalez at last month’s BELLATOR 283, No. 1-ranked lightweight contender Usman Nurmagomedov (15-0) will look to fulfill the prophecy foretold by his cousin, Khabib Nurmagomedov, and become BELLATOR’s lightweight champion. At just 24 years old, Nurmagomedov’s rapid rise to the top of the division has been thrilling and he now sets his sights on dethroning Pitbull in the co-main event of the blockbuster BELLATOR 288 event, becoming BELLATOR’s youngest reigning champion in the process.

When the BELLATOR Bantamweight World Grand Prix Semifinals continue, two animated trash-talkers, interim title holder Raufeon Stots (18-1) and No. 6-ranked Danny Sabatello (13-1), will finally settle the score after a heated, months-long war of words. After Sabatello scored a dominant unanimous decision victory over Leandro Higo in June, Stots was on hand to face off with his future foe in the center of the BELLATOR cage. What ensued from the crowd in attendance and the fans around the world has sparked arguably the greatest “Babyface” vs. “Heel” matchup in BELLATOR history.

Raufeon “Supa” Stots has been perfect in his first six fights with BELLATOR, which earned him a spot in the BELLATOR Bantamweight World Grand Prix to face close friend and training partner Sergio Pettis for the Bantamweight World Title in April.  After Pettis suffered an injury, the bracket was reshuffled, and Stots ended up facing former champion Juan Archuleta at BELLATOR 279, capturing the interim title with a third-round head kick KO. Stots, who developed his MMA chops primarily at the famed Roufusport Academy, was a two-time NCAA DII wrestling National Champion for the University of Nebraska at Kearney.

For Danny “The Italian Gangster” Sabatello, the road to the Semifinals was slightly longer as the American Top Team prospect had to compete in a “Wild Card” matchup against Jornel Lugo at BELLATOR 278, whom he dispatched via unanimous decision before making his way to his quarterfinal matchup with Higo.

The Purdue wrestling stud has effectively used his ground game to subdue and dominate his opponents inside the BELLATOR cage. With and endless stream of trash talking, Sabatello has captured the MMA world’s attention as one of the greatest heels in the game. The two have been on a collision course for months and we’re about to see who has what it takes to move onto the finals for their shot at the million-dollar prize.

On the opposite side of the semifinal bracket is an equally compelling matchup featuring two of the top-three ranked fighters in the 135-lb. weight class in No. 2-ranked Patchy Mix (16-1) and No. 3-ranked Magomed Magomedov (19-2).

Patchy “No Love” Mix, 28, has established himself as one of the most fearsome grapplers in the sport, dominating opponents and scoring remarkable highlight-reel submissions in the process. His current three-fight winning streak includes wins over fan-favorite James Gallagher and former champion and pound-for-pound great Kyoji Horiguchi, the latter of whom Mix outpointed to advance to the semifinals back in April.

Against Magomedov, Mix will look to continue his dominant ways and secure a Grand Prix finals berth and opportunity for $1,000,000 against the winner of Stots and Sabatello.

Looking to do the same is Russia’s Magomed “Tiger” Magomedov, 30. While Magomedov has been sensational throughout his BELLATOR tenure to date, he reached another level in his BELLATOR 283 quarterfinal fight, submitting Enrique Barzola. Magomedov’s high octane striking arsenal and potent submission skills have seen him defeat a wide array of quality opponents, including former UFC world champion Petr Yan. 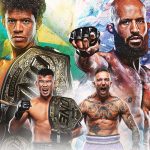 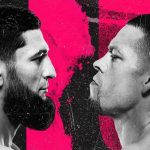