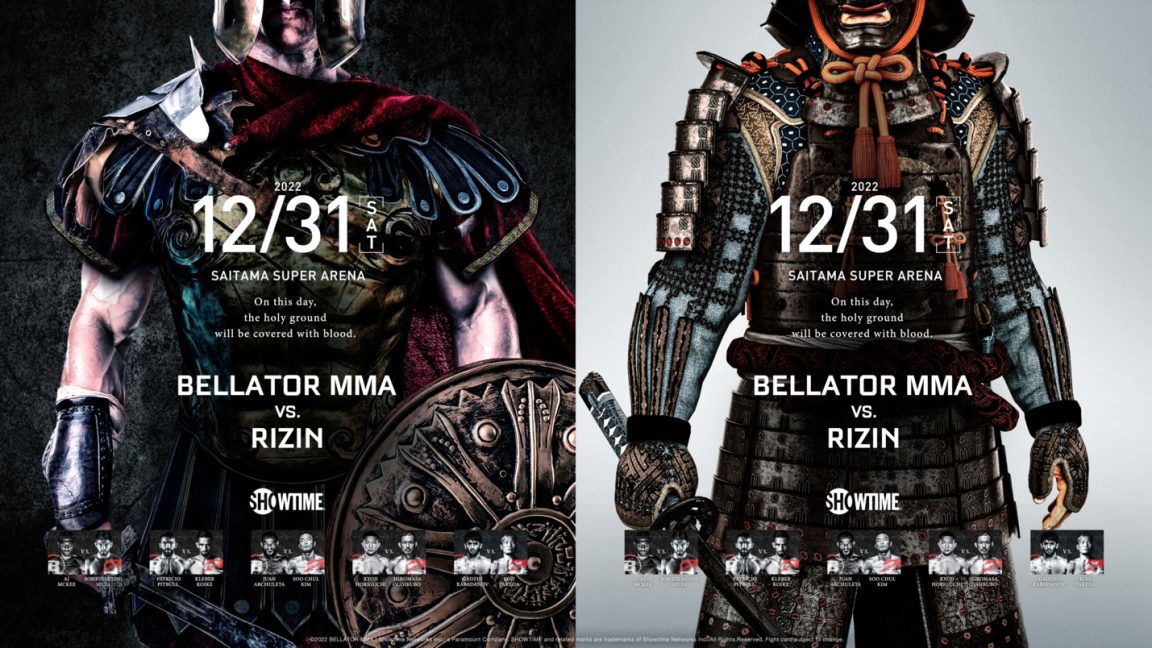 Bellator vs Rizin  – BELLATOR MMA President Scott Coker and RIZIN FF President Nobuyuki Sakakibara spoke with assembled media today ahead of the historic New Year’s Eve event, which features a star-studded lineup stacked with current and former champions. The mega event takes place at the world-famous Saitama Super Arena in Saitama, Japan on Saturday, Dec. 31 and will air in the United States on SHOWTIME at 8 p.m. ET/PT.

“This is a relationship that started in 2004, 2005. It’s been many years of working together. It’s been a friendship and a relationship that has led to these fights taking place. It’s not always easy; there have been bumps along the way to get to this. I’m extremely happy about what we’ve been able to do with this event. We’re ready to go.”

“I’m really excited and honored to be a part of New Year’s Eve at this level. Meaning a fight where we’re going to bring five of our top guys against five of RIZIN’s top fighters and champions. As you guys know the history of this arena having fights on New Year’s Eve, I believe it goes back 20 years now and even when I was working for K1 at the time and then I stopped working for K1 around 2006, 2007 but I still went back to Japan to see the New Year’s Eve show because it was such a big spectacle. If you’ve never been there or never seen it, you have to tune in and watch it because it is something spectacular.”

On this being the first of future co-promotions: “Sakakibara and I talked about two events. The next one has to be in the cage, and it has to be BELLATOR rules. It would be different. Whether in the US, or somewhere else. I think Hawaii would be fun. I just want to get through this one on the 31st, and then we can go from there.”

“Our relationship really started when we were trading fighters back and forth. Shinya Aoki fought here against Gilbert Melendez. Years ago, we sent Josh Thompson to fight Tatsuya Kawajiri. Sakikabara saved us one time when we were doing STRIKEFORCE. We didn’t have a main event and I asked Sakakibara if he would send somebody over and he sent over Alistair Overeem to fight Vitor Belfort. He really went out of his way to help STRIKEFORCE back in the day.”

“Working with other promoters there has to be a certain amount of trust and what are they bringing to the table. I think really the question is what is the relationship going to look like moving forward and what fighters are they going to want to fight. You are putting your fighters in harm’s way, you’re putting your brand in harm’s way and that’s OK because that should be the martial arts way.”

On fighters who were also considered for the event: “I would say Aaron Pico is someone that we wanted to bring to Japan, but because of his shoulder injury he was not able to. Aaron is someone who I think personally would love fighting in Japan.”

“When I think about two promotions getting together like this and not just doing one fight, or you know two fights, this is a five-on-five team match. What I mean by that is that it’s like the Olympics, you bring five of your best athletes in different weight classes and they bring five of their best athletes and this is like a mini-Olympics in my mind. Historically because of the way the MMA companies have been so separated or maybe working with their own verticals, it just hasn’t happened. The UFC doesn’t do it. In the past, we haven’t done it. Sakakibara hasn’t done it. We’ve done one-offs here, one-offs there. But to do something like this where it’s five on five, the best fighting the best, it’s a historical event which is why I think the people are so excited.”

On Gadzhi Rabadanov’s selection to Team BELLATOR: “Khabib Nurmagomedov said ‘I have a fighter I’d like to bring to Japan,’ and I said of course.”

On the bout order: “Of course, there’s always personalities involved. I will tell you something: I was impressed at the press conference. It was AJ and Pitbull, Juan and Horiguchi, they understood this was a team. You’re on a team. There was bonding. But believe me, when this is over, that rivalry isn’t. But for the moment, they’re on the team. I feel like there’s camaraderie here and on Team RIZIN. As far as who fought last, that came down to RIZIN, because it’s their champions. They’re just all happy to be there, they’re excited to fight, and they’ll be ready on December 31.”

“We have not discussed that with any of the fighters as far as incentives for winning their fights. It’s something we’ll think about, but we think there’s enough incentive built-in; how much it means to win and be a part of this event, for how historic it is.”

“(Sakakibara and I) talked about a couple of things, but I don’t want to get into it. Betting isn’t what it used to be a month ago. It’s not going to be monetary, but I will be putting something on the line with Sakakibara. But I don’t want to talk about it yet.”

On the event’s officials: “We are bringing two officials over from the US. I think that’s going to be the judging and the managing of all the bouts. Referring, judging, and managing the bouts will all be done with the Japanese organization and our officials.”

“I’ll tell you: we want to go 5-0. That’s my goal, to win every fight. But in MMA, it’s going to be very hard to do. The goal is to go 5-0, but one wrong punch, one wrong kick, or one takedown — one mistake could change the outcome of the fight. In MMA, things can change extremely quickly. It’s hard to predict an outcome. I’m sure Sakakibara wants to go 5-0 against us, too. I think that’s why it’s such a great promotion. Let’s let the fighters fight, and we’ll see what happens.”

On Roberto de Souza potentially competing in the Lightweight World Grand Prix: “The lightweight tournament, which we’ve committed to, will happen in 2023. We haven’t committed to when it will launch, but it’s an exciting division with a lot of young stars. I’m super excited about it. We didn’t make any of these title fights because we didn’t want to tie up their champions; maybe we can have a champion vs. champion thing at the end of the year. But to tie up their champion for a year would be difficult. Timing would be an issue.”

“The main reason (for this co-promotion) would be, just as Scott has described, the long-term relationship we’ve had. We’ve both been in the business for a long time and seen the ups and downs. The healthy competition we have is why. We’re doing this because of Scott Coker, and more because of Scott than because of BELLATOR. That’s one reason. Another reason is, despite where the MMA origin came from, PRIDE had its days in Japan. The modern-day industry is from North America; it’s the place for martial arts right now, and BELLATOR is one of them. As a promotion from Japan, it’s very exciting for us to take on and challenge one of the major leagues. For us, it’s very important to challenge the major league, to challenge North America, to challenge the global market: that’s what the Japanese fans want to see.”

“When we first saw BELLATOR’s lineup, we truly felt how serious Scott was with this co-promoting event. Like he said, he brought the best. He was sincere with our request. When we saw the lineup, we were excited, but we also knew we needed our fighters to fully commit to taking the fight. We needed to respond by giving our best. We’re very excited, but we’re very nervous at the same time.”

“RIZIN started our event back in 2015, so this will be our seventh New Year’s Eve. We had cooperation back then. New Year’s Eve is a big day for us, culturally. It’s become a tradition, and it’s become a culture people expect on New Year’s Eve. We’ve always wanted to make NYE the biggest event of the year, and people are always anticipating what they will see this year. Now is the perfect time to collaborate with BELLATOR, who are bringing their best, so it is the best time to do this event.”

“We don’t want this to be a one-time thing. We know the top versus the top is what everyone wants to see. We hope this can be the beginning of something new in our industry. You can only go so far when you do the rankings within your own promotion. We believe this is the next step for our industry. We’ve been talking with Scott about this, and we think it’s only the next step that we take our athletes to the US and fight under BELLATOR rules. We think this makes sense.”

“Fedor is definitely a superstar, a fighter who built an era of a sport. I plan on traveling to LA to watch his last fight. There’s a lot of mixed emotions behind his last fight.”

“It’s a very interesting situation because Horiguchi is a very popular fighter amongst the Japanese. Like in baseball we have Hideki Matsui… We watch the Japanese fighters go overseas and do well in other promotions and it makes us proud and we are very proud of that. It’s not that we feel uncomfortable. This is like Shohei Ohtani — we are happy we are able to bring Horiguchi back as a Major Leaguer.”

“I think this is the beginning of new things and new ideas to be born, so the potential is there.” 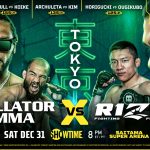 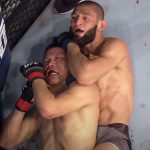