UFC® continues its run of shows at UFC APEX with a must-watch women’s bantamweight contenders’ bout featuring former champion and No. 2 ranked contender Holly Holm vs. No. 5 Ketlen Vieira. Also on the card, a welterweight matchup will see No. 14 ranked Santiago Ponzinibbio take on Michel Pereira.

Just weeks before she gets inducted into the International Boxing Hall of Fame, former three-division boxing champion Holm (14-5, fighting out of Albuquerque, NM) has been showing off her striking prowess since joining the UFC in 2015. Since then, she’s made a name for herself by securing numerous highlight-reel knockouts, such as her victories over Ronda Rousey and Bethe Correia. Now, Holm attempts to extend her two-fight win streak and reinsert herself into the title conversation.

Vieira (11-2, fighting out of Manaus, Amazonas, Brazil) looks to add another statement victory over a former champion to her resume. A black belt in Brazilian Jiu-Jitsu and Judo, she holds impressive wins over Miesha Tate, Sara McMann and Cat Zingano. Vieira now intends to snatch Holm’s spot in the rankings in her second consecutive UFC main event.

The Ultimate Fighter Brazil alumnus Ponzinibbio (29-4, fighting out of Coconut Creek, Fla.) aims to work his way up the welterweight rankings with a showstopping performance. A skilled striker with 14 first-round knockouts, he has earned notable wins over Neil Magny, Gunnar Nelson and Court McGee. Ponzinibbio now aims to defend his spot in the Top 15 against the surging Pereira.

Pereira (26-11, fighting out of Las Vegas, NV.) plans to deliver another impressive performance against the toughest opponent of his career. The owner of 12 first-round finishes, Pereira has entertained fans with his victories over Danny Roberts, Niko Price and Andre Fialho. Now, Pereira hopes to further cement his welterweight run and break into the rankings for the first time.

Additional bouts on the card 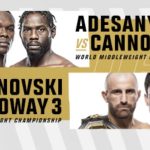 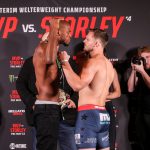