Las Vegas – UFC International Fight Week returns to Las Vegas and will be capped by a stacked card headlined by a blockbuster championship double header. In the main event, reigning middleweight champion Israel Adesanya defends his crown against No. 2 ranked contender Jared Cannonier. In the co-main event, featherweight champion Alexander Volkanovski has his sights set on successfully defending his title once again against No. 1 ranked contender Max Holloway.

Arguably the most popular champion in the UFC today, Adesanya (22-1, fighting out of Auckland, New Zealand) goes for his fifth consecutive title defense against one of his most dangerous opponents to date. Undefeated at middleweight in his MMA career, he has delivered impressive victories over former champions Robert Whittaker (twice) and Anderson Silva, as well as Marvin Vettori and Paulo Costa. Adesanya now plans to further extend his legacy as champion by taking out another top contender in stylish fashion.

Cannonier (15-5, fighting out of Anchorage, Alaska) intends to make the most of his first UFC title shot with another signature KO. A former heavyweight and light heavyweight, Cannonier has proven that he can knock out anyone in any weight class, but it’s at middleweight where he’s been at his most devastating, with his victories over Derek Brunson, Jack Hermansson and David Branch as proof. He now aims to dethrone Adesanya and add his name to the list of middleweight champions.

Surging UFC featherweight king Volkanovski (24-1, fighting out of Windang, New South Wales, Australia) has cemented himself as one of the best pound-for-pound fighters in the world. Undefeated in UFC in 11 fights, he is currently riding the momentum of two sensational championship victories over Brian Ortega and Chan Sung Jung. Volkanovski now expects to leave no doubt in his trilogy with Holloway that he is the true champion of the division.

Fan favorite Holloway (23-6, fighting out of Waianae, Hawaii) is gunning to regain his title and further his legacy as one of the best featherweights in UFC history. The record holder for most featherweight wins, finishes and strikes landed, Holloway has entertained fans with wins over Yair Rodriguez, Calvin Kattar and Jose Aldo (twice). He now looks to make a statement in his third fight with Volkanovski and secure another impressive stoppage.

Additional bouts on the card include

No. 12 ranked middleweight contender Brad Tavares (19-7, fighting out of Las Vegas, Nev.) plans to defend his spot in the Top 15 against Dricus du Plessis (16-2, fighting out of Gauteng, South Africa)

Tickets will go on sale Friday, May 13 at 10 a.m. PT and are available for purchase at axs.com. Ticket sales are limited to eight (8) per person. UFC Fight Club® members will have the opportunity to purchase tickets Wednesday, May 11 at 10 a.m. PT via the website www.ufcfightclub.com. A special Internet ticket pre-sale will be available to UFC newsletter subscribers Thursday, May 12 starting at 10 a.m. PT. To access this presale, users must register for the UFC newsletter through UFC.com. 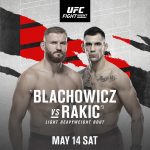